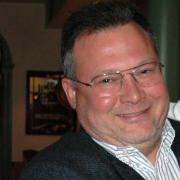 This is a photo of Yaroslav Mudriy [for critical security concerns, his real name cannot be revealed at this time], with his niece Mariya and sister-in-law Olena taken in the strikingly beautiful 1600+ years old city of Kyiv when I visited them in 2006. Yaroslav and his brother Oleksa Dovbush [same security concerns] moved to Ukraine 31 and 30 years ago, respectively, and both became successful U.S. investors and entrepreneurs.  In addition to Mariya (who is currently a first-year student on scholarship at a prominent university in the U.S), Oleksa  & Olena have a 7-year old boy named Romchyk.

Like others in the Western World, I have watched with horror as the news and updates of Putin’s attack on the people of Ukraine unfold.  The good news is that Yaroslav, Oleska and their families are relatively safe as of this writing. (please see the post script below for Yaroslav’s moving account of his harrowing escape from Kyiv at 4 am on the morning of Saturday, February 26th and his 22.5 hour journey to a safe city in Western Ukraine)

I know many are asking, “What can I do to help?”

My article 4 T-Shirts in the Entrepreneurs Closet described the t-shirt slogans of my start-up Sports Loyalty International (SLI).  Our favorite was “No Regrets,” and its meaning was pretty simple:

Our small team of entrepreneurs committed to each other to never say the words “would have, should have, could have” the morning after losing a sale.  Having a No Regrets mindset means doing your very best, seizing every opportunity, and “leaving it all on the canvas,” to use a boxing metaphor.

As I struggled to find actions I could take to help Ukraine, I decided to apply the “NO REGRETS” philosophy to help Yaroslav and his fellow Ukrainians. I know I cannot control the outcome of this terrible crisis, but there are at least a few things I can do to try and help right now.   Here are 5 actions we can all take to support Ukraine: 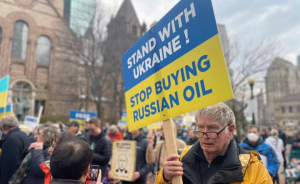 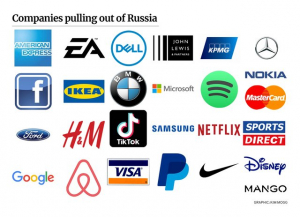 5. Pray for Ukraine and that Western leaders are taking actions to stop Putin that we are not aware of. For those of us who pray, please pray for the safety of Ukrainians, for the end of this crisis, and that actions are being taken by our leaders confidentially. Although I am not qualified to have an opinion on this, it has been maddeningly frustrating to watch President Zelensky’s pleas for the US and other Western Nation’s air support, including planes and the declaration of a no-fly zone (which 74% of American’s support).  I take some comfort in the hope that our leaders are indeed engaged in actions to defeat Putin’s attack that we are not aware of.  Remember that on May 1, 2011, while President Obama was telling jokes at the annual Washington Correspondent’s Dinner – the raid on Osama bin Laden’s compound was already underway. (please note that this is not meant to suggest that the US or any NATO country are planning an assassination of Putin)

One final action – please share this with others and – for the extroverts among us – download this sign, print a few copies, and ask the local businesses you patronize to post it in their establishments. 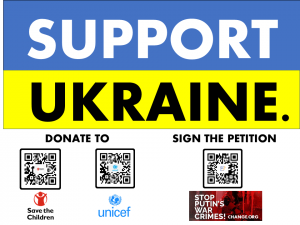 Please send me ideas you have for supporting Ukraine to craig@underwoodpartners.com.

PS Here is Yaroslav’s account of his escape from Kyiv and his reasons for staying in his beloved adopted country Ukraine (written in the third person):

Yaroslav — along with his best-buddy rescue cat Ma’rco — made a firm commitment to stay in Kyiv — even in the event of a Russian invasion.  In fact, for two weeks he was solo-building an improvised “bomb shelter” in a guest bedroom (where Craig, Yaroslav’s best friend at Oxford slept during his week-long visit to Ukraine in 2006).  But, soon after the Russian massive invasion began at 5:16 AM Kyiv-time on Feb. 24, 2022, numerous well-armed, hyper-fit, confident, and cheerful soldiers began to assume combat positions in this 1916 architecturally/historically important building.  Yaroslav on several occasions gave them bags of food from his ample stocks.  (Most residents/neighbors left the building by Thursday afternoon…)

At 2:00 AM Kyiv-time on Saturday Feb. 26, the Ukrainian commander told Yaroslav: “Please leave immediately.  When asked “why?”, he answered: “Because we know, that they know, that we are here.”  Yaroslav left on foot at 4:00 AM with Ma’rco in cat-carrier in his left hand, a heavy backpack, and a bag full of irreplaceable original documents in his right hand.  As he made his 1st step onto the sidewalk, a ferocious firefight began (replete with machine guns, RPGs, and mortars) several hundred yards away behind the facade of one of Ukraine’s finest and oldest universities.

After a few kilometers of walking, and battered by abnormal physical activity for many days and no sleep for 70+ hours, Yaroslav had to stop.  Thankfully, Oleksa arranged for a good American Friend whom he met in the early 1990s, to come and pick Yaroslav up at 7:30 AM — just after Martial Law curfew had ended.  Yaroslav was kindly driven some 15 kilometers to the ring-road, where after a mere 8 minutes he hitched a ride that would take him, 19 hours and 600 kilometers later, away from embattled Kyiv!

Oleksa is adamantly determined to remain in Ukraine.  But, should the situation radically deteriorate, he will –for the sake of Romchyk – evacuate to Poland or Slovakia.  No matter what, Yaroslav is NOT going to leave Ukraine (and 2 months of daily calls/e-mails from the U.S. State Department to “evacuate immediately” simply fell on deaf ears…).