Recently, I had a similar experience with Gild Hall, my favorite NYC hotel.  Located a short walk from Year Up’s awesome NYC offices, I found Gild Hall on hotels.com several years ago. It’s an incredibly cool boutique hotel with an amazing staff and a great small bar and restaurant.  A few weeks ago I booked a room at Gild Hall for several nights to help my daughter move into her new apartment and meet with several colleagues in our New York office.

Because I was in my “panic training” mode for this year’s PMC, I got a late start leaving Boston and arrived in NYC just in time to pick up my friend in Harlem for dinner.  Several hours later I was on my way to Gild Hall and thought I would call to let them know I was arriving soon.  Andrew, the night manager, answered and was incredibly apologetic as he informed me that they did not have a room for me.  The hotel was fully booked, a guest had fallen ill and was taken to the hospital earlier in the day.  Understandably, they couldn’t kick the sick person or their family out of the room.  They tried to reach my earlier, but had an incorrect phone number on the reservation from hotels.com.  Andrew told me that they had booked a room for me at the Beekman, a sister hotel only a few blocks away. Frustrated, I drove to the Beekman to check in. 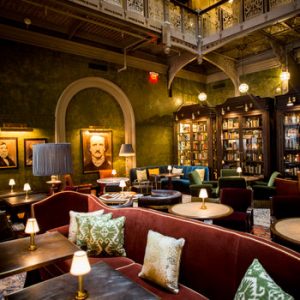 If you haven’t been there, the Beekman is also an incredibly cool hotel, located inside what was originally called Temple Court, the 134 year old building that was one of Manhattan’s original “sky scrapers.”  It has been impeccably renovated with a soaring courtyard bar and two very good restaurants. I checked in around 1:30 am, and with several bags and CHUbike, accepted the help of the late night bellman to my room. He was incredibly friendly, very professional and engaged me in a conversation about biking.  I learned his name was Odane Small.  Born in Jamaica, Odane had recently moved to the US.

Gild Hall called me the next morning and let me know that my room was ready.  As I packed up, I remembered how impressed I was with Odane and thought he might be interested in Year Up. I have a personal goal to recruit at least one student a month to join Year Up and carry with me a small information card created Kim Wheeler from our awesome marketing team. I tried to find Odane when I checked out, but he had left for the day so I gave my business card and the student info card to another bellman and asked him to give them to him.  Later that evening, Odane called me to follow-up and is now in the process of applying to Year Up NYC. 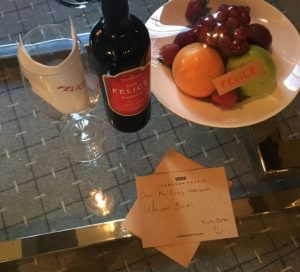 That alone would have made up for the frustration I encountered the evening before, but the story gets better. When I arrived at Gild Hall, Manager David Finch greeted me with the news that (a) they had comped my room at the Beekman for Saturday night and (b) they had upgraded me to one of their amazing suites for the remainder of my stay.  And when I entered my room I found a note from David along with a huge fruit basket and a very nice bottle of wine.  Both totally unnecessary and greatly appreciated.

Needless to say, I am now more than ever a “raving fan” customer of Gild Hall for life.

P.S. I actually feel at least partially at fault for what happened on that Saturday night.  During the 3+ hour drive from Boston to NY I kept thinking that I should call the hotel to let them know of my late arrival.  My bad for not doing so!  Apologies to Andrew, the night manager, for my less than honorable reaction to the news my room was not available!

Leading by f*ing up
Scroll to top