Recently, my dear friend, Year Up colleague and work “therapist” Betsy said “I know a lot about your dad.  Tell me about your mom.”

My mother Hovah Vonda Hall Underwood left this earth on September 24, 2004.  At her memorial service, I spoke about 6 of the most important lessons she taught me and those who were fortunate enough to have known her by the way she lived her 85 years:

We found a file in my mother‘s desk over the weekend labeled, “inspirational quotes.” One of the items in the file was a handwritten page titled Don’t forget to note. In the first quote was “age is not an important unless you are a cheese.”

As amazing as it sounds, my mother spent only 27 of her 30,561 days in the hospital, and 12 of those were to give birth to my sisters and me. At the age of 82, my mother planned a vacation to Canaan Valley State Park. During that trip we also visited Blackwater Falls where she insisted on walking down and back up over 100 stairs to see the beautiful river.

How did she stay so healthy? My mother was wise. Living at a time when the benefits of diet and exercise were not nearly as well known or promoted as they are today, my mother knew. When we were kids, our next-door neighbors often had hamburgers and French fries or heaping plates of pasta for dinner but not us. Never French fries. Occasionally pasta, but only if accompanied by three vegetables – two green and one starch. And, we had to eat three bites of everything, no matter how “yucky” it was.

I can remember when I was around 10 years old my mother doing leg lifts on her bedroom floor and other exercises to accomplish what we now call “strengthening the core.“ Today, these exercises are performed daily by professional athletes and weekend warriors as well.

My mother had amazing discipline. She somehow managed to live in the Governor’s Mansion – home of the world’s largest cookie jar always full of Ryad’s chocolate chip cookies – and not gain a pound! I am sure I put on more weight during a weekend visit than she did living there for four (actually eight in total) years. 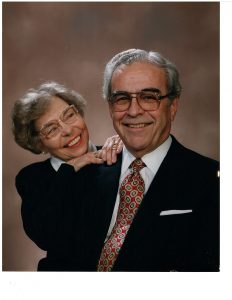 As children, we were all home schooled with the details Emily Post’s book of etiquette. I can assure you my sisters and I were as thrilled about this part of our education as most kids would be today. But I can also assure you that a few years later, when attending a formal eight course dinner at Oxford or the Greenbrier or the White House, we were thankful we knew what to do with all that silverware.

When my father became governor at the age of 34 in 1956, my mother was thrust upon the national stage with him. She knew that part of her role as First Lady was to represent the people of West Virginia on that stage and that her appearance and performance were important elements to transforming the brand of our state. A few weeks before she passed on, mother told my sister Sharon that she would make sure to look especially good on the days she wasn’t feeling so well, so that others were less likely to notice.  Great advice I have used frequently over the past year.

My mother believed in lifelong learning, and was a devoted consumer of newspapers, magazines, books and especially her beloved NPR

In 1995, my ex-wife Patty and I gave my mother a computer for Christmas. Before leaving West Virginia, we wrote out detailed instructions on exactly (we thought) how to compose and send an email.  When we returned home to Toronto, we found several “emails” from her that read something like this:

Dear Patty and Craig, thank you for the wonderful comp

Dear Patty and Craig thank you for the wonderful comp

Dear Patty and Craig thank you for the wonderful comp

We realized that the words were scrolling off the screen – not something that happens on an IBM selectric typewriter!  So, at the time, we thought maybe a computer wasn’t the best gift idea we ever had. But just three days before she passed, we were thrilled to receive an email from mom, announcing that after almost a decade of “needing to learn to use email,” she had succeeded!

4. “Talk a lot and communicate with your family. “ 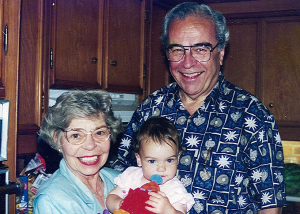 After Jordan was born I asked mom for her advice on being a parent.  Without pause she said “Communicate. Talk to your kids as much as you can and make sure you listen to them when they talk. And you and Patty talk and listen to each other too.”

After leaving the Governor’s Mansion, my father thought it would be a good idea to return to the family home in Huntington. My mother thought differently, wanting it to be a short drive to see  her Charleston grand kids. Guess who won?

Mom was always there for her family, whether that meant walking upstairs stadium or theater stairs to watch a ball game or see a play, or flying to Toronto and Boston for grandparents day. Her home was filled with pictures of her kids and her grand children.  And even at 85, she was still the cruise director of the family, scheduling vacations, cooking Easter dinner, and planning our annual family photo shoot.

My mother truly did see a world where the glass was always “half full. “ She almost never complained and had the almost unbelievable strength to make it through even the most difficult times. When it was time to leave the Governor’s Mansion in 2001, my siblings and I thought it would be a good idea for mom and dad to move to Edgewood Summit, a beautiful independent and assisted living facility. They thought otherwise, and again, they won. One of the reasons my mom gave for not wanting to live there was she didn’t want to look like a “little old lady riding the bus.” At that time she was 83 years old and maybe 5’10 and 1/2” tall on a good day, but I remember thinking, “if you think you don’t look like a little old lady, we can roll with that!”

“Do not withhold good from those who need help, when it is in your power to help them. Do not say to your neighbor, go and come again tomorrow I will give it – when you have it with you today.”

As the newspapers’ wonderful stories about my mother’s passing reminded us, her legacy is not only that of a loving wife, mother and grandmother, but also of a devoted public servant in her own quiet way. From her early career as a social worker to making time to support the Cammack Children Center for Orphans – even as a young mother with three small children and a traveling husband – to her incredible service as the first lady of West Virginia, my mother used all of her resources and assets to help those in need, to help those who were not lucky enough to have parents or access to education or basic healthcare. She was a tireless and effective advocate for children and women’s issues and we can all honor her life’s work by following in her footsteps

Although my mother’s body left this earth in 2004, to all who were blessed to know her and especially those of us who got to call her mom or grand mom, her soul and spirit are very much with us today and will remain forever in the lessons she taught by how she lived:

My mother kept this quote from Emerson on her desk:

To laugh often and much: to win the respect of intelligent people and the affection of children; to appreciate beauty; to find the best in others; to appreciate beauty; to leave the world a bit better, whether by a healthy child, a garden patch or a redeemed social condition; to know even one life has breathed easier because you have lived.  This is to have succeeded.

Leading by f*ing up

The Most Important Leadership Book I Have Read (and the shortest blog post!...
Scroll to top